For many years, I fell in with the idea that Long Day Cares are based around the idea of age-based rooms that children transition between when reaching a certain age.  At one point in my career, this was pretty much the way that regulations were set up.  But 2012 came along and opened up a whole new world for us.  Many things were wonderful.  And some things that should have been wonderful, were made a nightmare, through misuse and abuse.

I still fight for the idea that those changes were made to enable us to reimagine the way we worked. If we take the entire National Quality Framework (NQF) into account – we have a space that allows us to find ways of working that honour not only children, but also our educators and teachers. For me, and the thinking I was already engaging in – the NQF was a treasure!

We are no longer restricted by age-based rooms.  We are no longer bound to have adults in spaces dictated by the number of children. And yet – this is still the mindset of so many in our sector.

The calculation of ratios across the service, immediately enabled engagement in true indoor/outdoor practice….. a world in which children could flow freely between the indoor and outdoor environments…… a world in which the adults could judge where they were needed by children.  The National Quality Standard spoke about seeing routines as an important part of the day and understanding the “learning potential” of these times.  It spoke about limiting the times that children are herded together in large groups under the guise of learning.  So many doors were opened.  And yet so many chose, and still choose, to slam them shut. 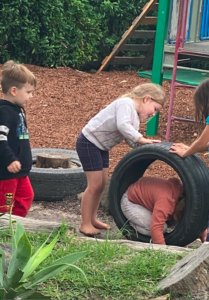 Right back at the beginning of that time, I began imagining with my team.  We talked endlessly about the visions that we had, and our dreams for children.  If we could choose any way of being with children – what would that look like? And right back in the beginning, we had visions and dreams that we simply couldn’t comprehend – because they were so vastly different.  And so, we took baby steps towards what we thought would actually be achievable. And what that started with, was just opening the doors to allow children to flow between inside and outside.

We made many observations during this time.  I’d say one of the most profound, was that the majority of children seemed to prefer to spend the majority of their time in the outdoors.  The next, was the way we watched children from the different rooms building relationships……  the magic of unlimited sibling interactions…… and the way that the older children in the centre leaned into a nurturing and protective role towards the younger children. The worries and concerns of many educators about the “safety” of the younger children, was almost immediately dispelled – with little need for us as adults to intervene.  We found children more than capable of respecting and caring for one another. 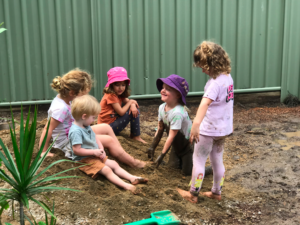 It was at this time, I started reaching further, and doing research around what at that time were seen as pretty controversial practices – and still are!.  One of my first readings supporting multi-age environments was Peter Gray’s book, “Free to Learn”.

Professor Gray’s research has an aspect that revolves around historical data.  He looks at the evolution of society, and states that “the segregation of children by age is a (tragic) oddity”.  He also writes of how children in hunter-gatherer cultures educated themselves through play and exploration in broadly age-mixed groups. The value of free age mixing is undisputable.  And yet…….

Other early childhood theories are supported and enhanced when viewed through the lens of multi-age grouping, including:

Gray concludes that these concepts apply wonderfully to mixed age groupings, “where abilities differ considerably, and the learning and scaffolding occurs continually and naturally”.

We watched daily, moment by moment – the absolute benefits of children communing together in mixed ages. Gradually, the borders between the rooms dissolved.  Children found a new freedom in being able to not only flow between inside and outside, but from room to room. 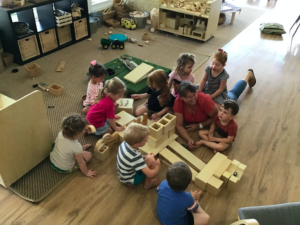 Fast forward six or seven years from the beginning of the journey, and we began investigating primary care.  And while this is probably a whole new topic for whole new day, it becomes important. Within this idea, by the eighth year, we abolished the idea of age-based grouping completely and evolved every child in the centre into primary care groups, ranging from 15 months of age to 5 years.  Children enter a group, and remain with this group for their entire journey at the centre, building intimate relations with their primary carers….. who never change. This type of care is firmly supported by current brain research, in which longevity studies show improved outcomes for children with stable primary carers in their early years.

Imagine the ways in which children build and keep the relationships that help them feel safe and secure.  Imagine the family type bonding that is nurtured as the younger children in the group evolve into the older children.  We were not created to grow to our potential in age segregated groups. Imagine a world where community is central – and the development and best interests of each child are central and supported.  Isn’t this the world we should all be aiming for? 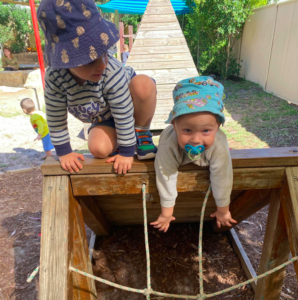 (writing from the experience of leading the team at Karana from 2011 through to 2020).